The Zombie Bride has a white torso and a 2x1 slope piece as legs. These two pieces are white and have printing on them, representing a dirtied, torn white dress. Both her arms and hands are greyish-green. She has a double-sided head; on one side, she is half smiling, and on the other side, she looks miserable. On both sides, her head is greyish-green, and she has one yellow eye, one blood-red eye, and red lips. The bride has dirty blonde hair in a ponytail.

The wife of the fellow zombie, the Zombie Groom, who are powered by their love of each other, and when you find one, you will always find the other. Living in the Graveyard, with a visit from the Zombie Driver, as he is seen in 9465 The Zombies. The Zombie Bride is the only female zombie in the theme. 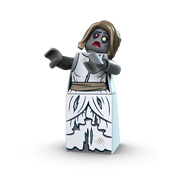 Retrieved from "https://brickipedia.fandom.com/wiki/Zombie_Bride?oldid=1965933"
Community content is available under CC-BY-SA unless otherwise noted.