The Zombie Driver, also known as Renfield, is a minifigure and a major character of Monster Fighters released in 2012 for Monster Fighters. He is a driver for Lord Vampyre, and drives the Vampyre Hearse, Zombie Car and the Coffin Car.

Zombie Driver's earth blue legs are printed with rips and tatters. His torso is printed with an old, torn, earth blue valet driver uniform. He has earth blue arms and one grey hand, and sports a dark maroon glove. He has a dark grey face printed with blank eyes and a gaping, green, toothy mouth, and wears a black driver's cap, commonly used in City sets, for police officers.

Zombie Driver is a zombie, who works as a valet for the Lord Vampyre, driving the Vampyre Hearse. He also spends time in the Graveyard. Lord Vampyre's loyal, hard-working servant, who is known to do as his wishes, and do the most horrible and gruesome jobs for his master, and will do anything to protect the Vampyre family. 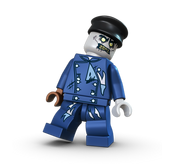 Retrieved from "https://brickipedia.fandom.com/wiki/Zombie_Driver?oldid=1875149"
Community content is available under CC-BY-SA unless otherwise noted.