He has a top hat, the same as Sam Sinister, and The Penguin or various snowmen from different sets. He has a new printed torso which looks like a circus performer's suit or it could be a vest that has been torn up. He also has an undone red bow tie and a red sash. Both his hands are greyish-green, and his right arm is white while his left arm is greyish-green, which is meant to represent the left sleeve of his shirt having been torn off. The head is the same color with glowing yellow eyes and a snarl. His legs are basic dark grey.

They were all brought to life by the reclusive Voodoo Doctor as a means to create an army of the undead. 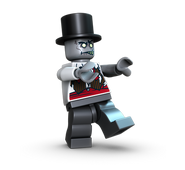 Retrieved from "https://brickipedia.fandom.com/wiki/Zombie_Groom?oldid=1965931"
Community content is available under CC-BY-SA unless otherwise noted.