Brickipedia
Register
Don't have an account?
Sign In
Advertisement
in: Class 4 articles, Video game only minifigures, Batman Minifigures,
and 4 more

Zoo Sweepers are people who sweep and clean up the zoo at night. They have tan uniforms, and appear in LEGO Batman: The Video Game. They are seen in the "Power-Crazed Penguin" episode, level four, "Zoo's Company". 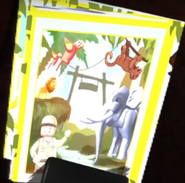