Zotaxians are aliens from the planet Zotax, featured in the UFO and Insectoids themes.

Zotaxians and planet Zotax were the focus of the UFO theme, which was launched in 1997. The Insectoids theme, launched in 1998, continued the story, where the Zotaxians fled to the planet Holox (known as Armeron in Europe). However, alternate stories for both themes were presented in different markets, and Zotaxians have been depicted both as heroes and villains.

An advertisement and leaflet in issue 151 of the German comic "Die tollsten Geschichten von Donald Duck" details backstory and characters for the UFO theme. Here, the grey alien is named the Overlord (who is one of the great generals of Zotax and conducts negotiations with inhabitants of other galaxies), the blue alien is named the Officer (a strategist who fights for justice), and the red alien is named Chamon, a pilot and commander of the space fleet. It is also said that Chamon's helmet amplifies his brainwaves and gives him telekinesis (this likely applies to the other UFO Zotaxians as well), and that his armor protects green crystals which give him vital energy. The planet Zotax is described as rocky, but covered by a giant organism that provides the Zotaxians with an atmosphere and protects them from the nearby lava planet Vulcox. Nearby Zotax is a black hole that ends in a strange tunnel, which leads to the universe that contains Earth. This depiction is consistent with the art on the UFO set boxes, and a 1997 UFO/Fright Knights commercial, which is also partially depicted in a comic in the leaflet. The comic shows Chamon and the Officer boarding the Warp Wing-Fighter and traveling from Zotax to Vulcox. The commercial also shows the Warp-Wing Fighter leaving Zotax and flying to Vulcox, where Basil the Bat Lord is then shown on the surface defending a castle from a lava dragon. While the commercial and comic show Vulcox on the other side of the black hole (in the same universe as Earth), the map in the leaflet shows it in the same universe as Zotax, likely in error.

In one segment of the Time Cruisers comics included in several LEGO magazines, Tim ends up trying to help Count Bat (a translated alternate name for Basil the Bat Lord) win a battle against Izralda, who is trying to contact the "Star People" (described as "beings from a distant universe ... now on their way to Earth") by turning Count Bat's castle into a Star Tower. She hopes to use their technology to become ruler of the world. She succeeds, but Tim turns the beam at the top of the tower downward, destroying the whole castle. Tim, his monkey Ingo, and Count Bat are saved from their fall by a UFO piloted by an alien named IXVIZIKIL (largely based upon the grey alien minifigure), who describes himself as leader of the Star People. The Star People team up with Tim and Count Bat and together defeat Izralda.[1]

In the US, the UFO aliens were more frequently depicted as invaders to Earth. Only two characters were named in this version of the story; the grey alien leader (Alpha Draconis, named Alpha Dragonis in LEGO Racers) and the red android, Andy Droid. The September 1997 issue of LEGO Mania Magazine claims the UFO aliens come from the planet Humorless, spend time battling Exploriens and Roboforce, and features a comic where an attempt at invading earth is thwarted when Alpha Draconis is frightened by his own face when it appears on TV.[2]

In UK catalogs, the aliens were left unnamed, but the blue droid was referred to as Techdroid I and the red droid as Techdroid II. The set descriptions for 6979 Interstellar Starfighter and 6975 Alien Avenger also implied the aliens are hostile towards humans, saying they "... are a potential threat to the survival of the human race" and "With Aliens breaking through our protective space barriers what effect will this have on human life as we know it?"[3]

The August 1997 Bricks 'n Pieces magazine (published in the UK) has a UFO comic, where the blue alien is named Commander X. The comic also involves Techdroid 1 and 2, though bafflingly, the minifigure shown to be Techdroid 2 is the same blue alien as Commander X, merely without a helmet. Presumably this was a mistake by the editors of the magazine, and "Techdroid 2" should have been the red android as shown in the UK catalogs. The bios also mention a "Black Droid Empire" never mentioned anywhere else.[4]

In the book Insectoids Invasion, it is explained that after a fight with their "cruel leader" (who is never identified), the Zotaxians fled from Zotax and crash landed on a barren planet called Holox (alternately named Armeron in the Time Cruisers comics and UK catalogs).[5] The planet's surface did not have any of the energy the Zotaxian's plants needed to survive, but when all seemed lost, they drilled into Holox and found a rich inner world with its own sun at the center. This inner world was inhabited by giant insects called Bilgin Bugs. The Zotaxians adapted their vehicles and armor to mimic the Bilgin Bugs, and designed voltstones that looked like Bilgin Bug eggs to gather energy from the inner sun. The Bilgin Bugs eventually realized that their eggs were being destroyed and replaced, and a battle began. The rest of the book maps out the inner world of Holox, and tasks players with solving mazes to get to the inner sun and back. Exploriens bases and vehicles appear throughout the book and appear to be working with the Zotaxians, and UFO and Aquashark vehicles appear as well.

In the Time Cruisers comics, it is shown that Professor Articus has been seeking a portal to Holox/Armeron for years, and that the portal is located in the tomb of Pharaoh Hotep. Tim is given the task of exploring it, and enters the portal, and collapses due to the lack of oxygen, but is saved by Navigator Sharp and Techno Leon. They descend into the inner world (which is depicted here as simply being hollow, instead of having many layers like in Insectoids Invasion) to collect voltstones, but are attacked by giant mosquitoes. They survive, and eventually land. Tim notices a light coming from a body of water (which Navigator Sharp speculates to come from alien life forms), and Tim dives in, where he encounters Stingrays and Hydronauts.[6]

In the LEGO Mania Magazines, the Insectoids story was mostly ignored, and instead it was said that they were "on a mission of intergalactic mayhem and mischief". The LEGO Maniac comic features them attempting to invade earth, much like their UFO predecessors.[7]

The 1999 UK catalog made the Insectoids more antagonistic than they had been shown prior in that region, saying: "The Insectoids continue to infiltrate earth as Planet Armeron becomes devoid of the Voltstone rock - the rock required for powering the 3 flying vessels, 6907, 6969 and 6977. Will they conquer Earth or are we strong enough to prevent the Insectoids from taking over our planet!?!"[8] 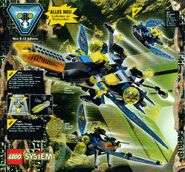 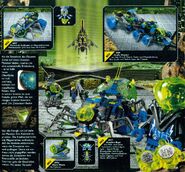 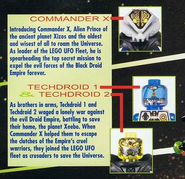 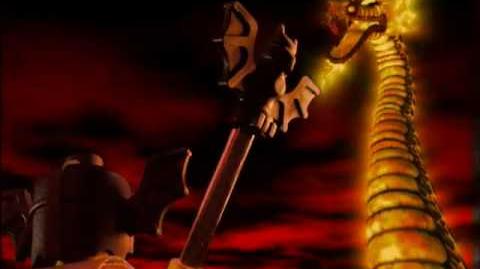 A Zotaxian in LEGO Racers