Zuckuss is a game character that appeared in the Nintendo DS version of LEGO Star Wars II: The Original Trilogy and in LEGO Star Wars: The Freemaker Adventures.

Zuckuss is brown with a gold bounty hunter uniform, brown cape, brown head, silver eyes and nose. He is a Gand.

Zuckuss is a Gand bounty hunter hired by Darth Vader to hunt down Han Solo, and the partner of 4-LOM. He is a schizophrenic Gand findsman. He also has split personality disorder causing him to sometimes speak in different dialects. 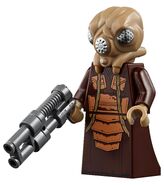 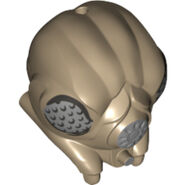 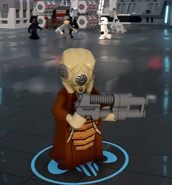