Evil Emperor Zurg, is a villain from the Toy Story franchise. This page is on his Toy Story 2 minifigure introduced in 2010. He is exclusive to one set. 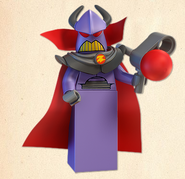 7591 Construct-a-Zurg
Add a photo to this gallery